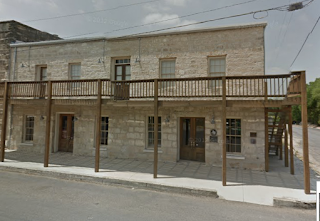 The Woolls Building, located on San Antonio Street in Center Point, is believed to be the oldest building in Center Point.
G. W. Woolls purchased the property in 1873. The building was erected sometime between then and 1875 by Sam H. Wellborn.  Woolls operated a general store here until his death in 1877.  His wife Kate continued the business and also served as postmistress.  The upper story housed the Rising Star Masonic Lodge 429.
In 1880, James Sellers and George Leigh bought the merchandise from Kate Woolls and together continued to operated the store until 1882, when Leigh became manager of the Stoneleigh Ranch and sold his share to Sellers.  In 1895 Sellers sold the store to Wm. A. Cocke.
A fire on Christmas night in 1900 destroyed the entire stock of the store and all the property of the Masonic lodge on the the second floor. The sturdy rock walls survived. The building was renovated and purchased by the Farmers Mercantile Cooperative Association in 1902.  Henry Noll, who later opened H. Noll Stock Company in Kerrville, was the general manager.  When the business opened in March, the advertisements said "it is not a money making, but a money saving institution ... net profits are returned to patrons as a dividend on their purchases." Every patron shared in the profits, members receiving full dividends, non-members receive half dividends on purchases.  It also advertised itself as an investment company, issuing interest bearing certificates which were redeemable on short notice.
It truly was not a money-making institution. The store freely extended credit to residents of Center Point.  It went bankrupt in 1910 and was forced to close.
Henry Noll took this concept to Kerrville and opened H. Noll Stock Co., another cooperative, in 1906. That business lasted until the death of the owner some 20 years later.

The Woolls Building was remodeled by John T. Young about 1940, and in August, 1946, Curtis and Lucille Eden moved their business, Edens Implement Company, from the Pafford building here.  In 1980, when Curtis Edens retired, he sold the  business to James T. Crow, who operated it as Edens Ford Tractors and later also moved from the building.  In 2002 it was listed on the National Register of Historic Places.  Today it is a special event facility.

Deborah
In addition to my family I love the Lord and His creation--most especially this beautiful place we live in. I also love learning about the people and the built environment of this place we call home.